If you don’t know what Mario Paint is, and you

aren’t already excited to find out what stuff you can

make in it, then this page clearly isn’t for you. On

the other hand, if you do already know what Mario

Paint is, and you are already excited to find out

what stuff you can make in it, then this is

THE page for you! 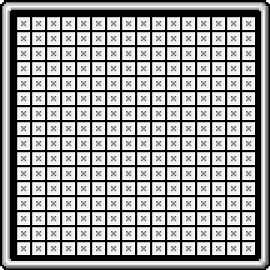 That right there is the blank custom stamp. You get 15 blank stamps at a time to work with, and exactly 16 shades of color.  However, when you play your cards right, you’d be amazed what images can be made in this game.

RANDOM OTHER
Newgrounds - "No Picture" image

Added a page for a Calvin & Hobbes resting picture.  I’ve long since thought it could be accomplished in Mario Paint (seeing the drawing in a C&H book).  A lot of things in C&H would work.

Added a page for a DareDevil picture.

There’s so many updates this time, I don’t even know where to start. Which is good!

- Added to the NES TMNT2 page, adding jumping and jump-kicking stamps for Leonardo, Donatello, Raphael, and Michaelangelo. Also, for Don, Raph, and Mikey, I added three animation-frames of walking, so that now all four turtles have their walking poses.

- Added to the NES TMNT2 page, adding Leonardo, Donatello, Raphael, and Michaelangelo all flipping through the air, and looking at the camera/blinking.